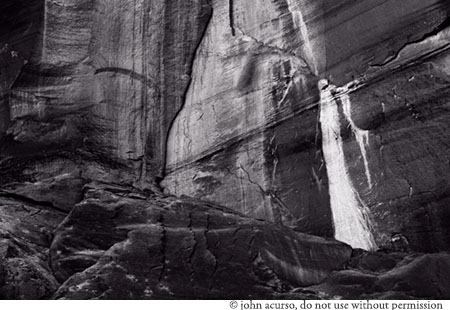 Generally, I try to avoid those blatant, tourist turnouts but I did take this one in May and then again this fall—and I really didn’t know why either time. I really didn’t know why because that is pretty much how I operate when I am out making photographs and not on an assignment or working a site specific project. I stop, turn this way or that, or take a strange road that presents itself based on a feeling I get when I make the decision. It’s sort of like that “tap on the shoulder” that I described in my last post here. So, I rarely end up where I started going or camp where I planned. In fact, I don’t plan what I will photograph or where, other than I know what personal projects or ideas that I might be working and have a basic idea of what areas I might head towards.  Over the years, this is the primary reason that I have not traveled with others when I’ve wanted to create personal work.

So while I probably did stop here on my first trip to the area back in 1984, because I do like seeing these ancient sites, I have probably passed it without a second look over 100 times since. When I got the urge to stop here, I sort of laughed to myself as I maneuvered around the line of tour buses to find a parking spot. I had no idea what I would find but I was pretty sure I wasn’t there to shoot the petroglyphs.

The access to the area is via a boardwalk and it is only about 100-150 yards long. People walking by make everything shake so it is impossible to shoot when people are anywhere near you—and the place was crawling with people. I was still a bit perplexed as to why I had stopped as well as how and what I was going to shoot, so I figured I might as well shoot one of the petroglyph panels. Just the act of setting up to shoot will generally get me “seeing” and often I don’t end up shooting what I first intended. Here, I actually did but then I started seeing why I was there—and the tour buses were starting to leave.

Back in the late 80’s, I was very interested in the natural biomorphic shapes I found in the landscape and often these were on the same walls where one generally finds these ancient artworks. In 1990, I released my “Under Perfumed Skies” series, which was entirely made up of such biomorphic forms. At that time, I was more interested in the elimination of place and the actual nature of the subject. On this trip, I had already started to return to looking for such forms but with a bit of a twist.

Finding these things, my camera is often pointed in places where others might not actually recognize what it is that I am photographing but people do stop and look—like when someone is standing on the street pointing up in the sky—then shake their heads when they don’t see anything—or at least what they expected to see. I suspect that some might want to ask that question I’ve heard many times, “What are you taking a picture of, Mister?”. In fact, when I was creating the first image here, a man did stop and gave me a very odd look as he surveyed the angle of the camera and then where it was pointed. I explained what I was photographing, and he did see it, while his wife just crinkled up her nose and said “where…what?” as he tried to explain it to her.

I ended up finding quite a few things that interested me, not all biomorphic forms, but interesting forms just the same.   I was even more perplexed when I stopped there again this fall. As I said, this isn’t a big place and I thought I had worked it pretty thoroughly in May but there was that feeling again—or maybe I just wanted a break. I did make some new photographs but I think the reason I stopped was that I “saw” one that I did in May in a totally new and different way—a way that I think will surpass the first version. I decided to include the one done in May, here, as it probably will never be shown anywhere again. 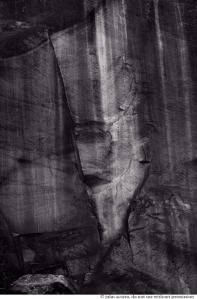 One of the most interesting things for me, when I do return to an area where I made one of these images, is how surprised I am to see what it was I actually photographed, and then created at home, back in its original context. Often it is larger or smaller than I remember and/or not even where I remembered it being. Sometimes I even have to work really hard to see it again. And not surprising, it isn’t uncommon that when I get home and look at what I shot, I scratch my head as I try to figure out: what did you shoot, Mister?!