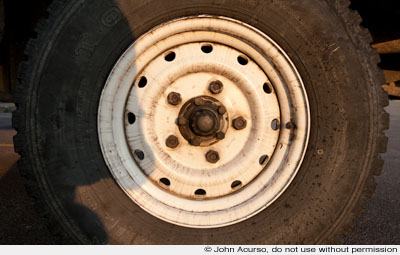 With a little paint in the axel I could have created some "art"!

You ever had one of those times you ask the question “what if?” ?  I think we all get them from time to time, where we question what might have been if this or that decision would have been different.  But, fortunately, that isn’t what I am going to talk about today, besides I think we all know that that is a pretty fruitless endeavor.  Instead, I am going to explore the “what if” that is laid on us from outside our control.

Let’s face it, we get a lot of this kind of stuff thrown at us, things we weren’t expecting, on just about a daily basis.  We take it in stride, because it is just life.  But there are also times when the unexpected throws us off track, it pushes us in bigger ways than those small daily blips.  It could be something serious like an illness. a major job/relationship change, or maybe even something as simple as the obligatory breakdown on a road trip–which is obviously what I am going to address.

What we do know about these unexpected events is that they test the people we are and much can be learned by our response.  We might get angry or sad at first but we learn to deal with it because there is no “what if” it didn’t happen, it did!  But most importantly, we learn to move on and look forward, not in our review mirrors.  We look for the new opportunities that will come to us if we let them. 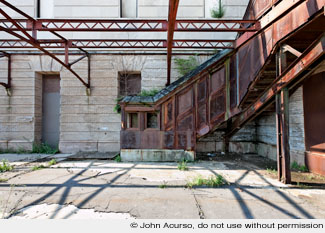 The ramp to the platform

A breakdown on a road trip certainly doesn’t have the gravity of a major life event, but it still has the same issues.  First there is irritation and the disruption it causes.  If we are on a tight schedule, and/or it is a weekend when no services are available, the frustration can be all that more intense.  But in the total scheme of things, it is just one of those mild irritatants–like certain people in our lives.

While I was traveling around the country, I had my first breakdown the second day out.  My itinerary was tight but did have a little flex in it.  As I got out of the car that afternoon, to make a photograph, and saw the radial splatter of gear oil all over my left rear wheel, my heart sank –but I also just had to laugh at the same time.  I mean seriously, the second freakin’ day! 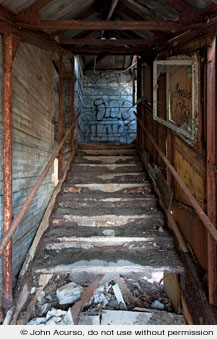 Fortunately, it was a Wednesday, mid afternoon and I was only 20 miles or so out of Omaha.  I hadn’t heard any grinding or other issues, so I got back in the truck and headed to town, I knew I could find a dealership.  I called ahead, got directions and, of course, was told they would most likely have no parts in stock for my vehicle.  They were also full of other cars being serviced for the Labor Day weekend.  Undaunted, I told them I would be there in about 15 minutes.  After checking in, I was told there were no loaner or rental cars available, but they could get me to my motel.  I found a motel and the “concierge” drove me over.  On the way, she asked what I was doing in Omaha and when I told her about my trip, she said she would get me a loaner car.

With my loaner delivered in an hour or so, I was set to head back on route the next day.  Since it was likely I would be stuck for at least a day and a half, I would head down the road a couple hundred miles or so and then drive back the following day to get the truck–assuming it would be done.

Thursday morning, I awoke to the clashing of thunder and the pounding of rain.  Checking the internet, there wasn’t to be any change in the weather the entire day –and it was the same forecast for those places I wished to head towards.  I took the cue and went back to bed and ended up sleeping on and off until the early afternoon. 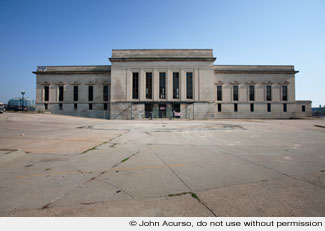 Having driven so many hours and miles the first day to get “on route”, I was still pretty tired.  The torrential rain made me take time to rest.  Also, it seems standard operating procedure that my personal photo trips just take a few days to settle into and get defined, regardless of how purposeful I think I am. So, I got an opportunity to review and think about what I had experienced so far and to refine my focus–if only a little.

But the great thing about all of it was that I got the opportunity to explore Omaha.  You see, on my work for Amtrak, I didn’t have to stop in Omaha as there was nothing that was part of the assignment there.  So even though it was one of the jump off spots, my only experience was trying to find a motel outside of town on the first night of the College World Series! 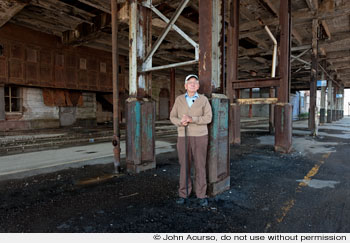 My buddy, Martin, on his 88th Birthday

With the rain breaking in the late afternoon, I decided to head downtown to check things out.  The weather was still iffy but I took the camera anyway, although I mostly just looked around.  I was a bit hazy (i.e. lazy) from the long sleep I had indulged in–which was possibly helped along by the prime rib and cool one I had just consumed!

Up early the next day, I was greeted by incredibly beautiful weather.  Since my truck wasn’t to be ready until after lunch, I headed back to photograph some of the places I had seen the day before and to look for the train station-kind of felt it was the least I could do.  Of course, I didn’t have my maps and quickly got lost.  With some help, I got there and found the opportunity that I didn’t foresee. 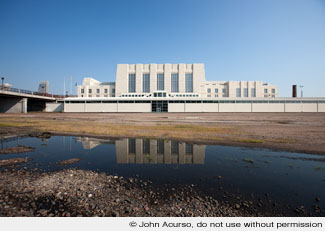 The old Union Station was across the substantially dismantled train yard that stood between it and the former Burlington Station, where I had parked.  It had been converted into a museum.  Except for the stub off the Burlington Station, the bridge that once spanned the immense train yard connecting the two was gone.  The art deco station looked pretty cool, but had some “improvements” which made seeing the original grandeur a bit difficult from where I stood.  (Later, I went around the front and the facade was pretty much hidden by other new structures as well.)  But the real gem was right next to me.

It appeared as if, and later I got the scoop, the Burlington Station was to be redeveloped but funds weren’t available, so it sat in its partial decay.  I don’t really know what it is, but I am always drawn to the crumbling remains of something that was once so alive.  I almost always stop at old, abandoned buildings, of any era, and just have to poke around even if I don’t photograph.  When you get something laid in front of you that is this grand, you have to nod to whatever higher power you ascribe to. 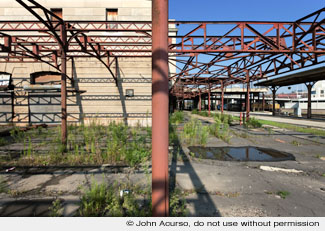 Anyway, I spent quite a bit of time there photographing and just wandering around.  On one hand, I wish I had had more time there but then sometimes it is better to move on with some of the mystery still unsolved.  Of course, one of the great finds here was Martin, who I discussed in an earlier post.  It was his 88th Birthday and he had lived there all his life.  His description of things in their day just made me wish I had a time machine and could see the grandeur that once was.

If there is any sadness that I find about all of this, it is that these grand old stations are not being used as train stations anymore.  In many cases, such as here, the Amtrak station is off in a modular building or some other non-descript structure.  I wish more would be like the Portland and Seattle stations, where the buildings serve multiple uses, including train travel.  Hopefully, this one and the one I saw in Grand Junction wont be torn down, but redeveloped into public spaces of some sort.  Then again, maybe if we could decide to get ourselves a modern, high-speed rail system, we could resurrect these ghosts and bring back the grandness that once was part of our psyche. 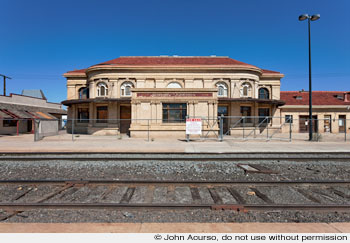