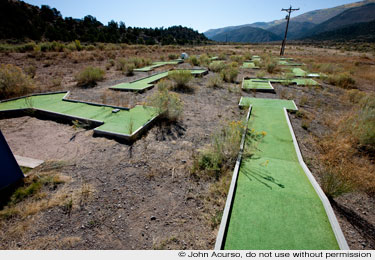 Your Lottery Dollars at Work

It seems that I have just been moving along quite rapidly these past few days.  Once through the Rockies, the route has been pretty much 65-75 MPH highway, so moving from town to town is quick.  But it is fun traveling through towns like Atlanta, Oxford, Akron and before, Rome, Palermo, Malta and such far from their namesakes.  I have to admit that I am still trying to figure out why Oxford’s main street is named Ogden?

I had a great time driving the dirt road through the Rockies, but am reminded of how you must act on things when an opportunity presents itself.  Back in 2006, I stayed at the State Bridge resort.  At the time, it seemed a bit like a summer place for the ski bums, with an active music scene and great restaurant.  Everyone was about 28 and it was a hip place.  The rooms were a bit sparse, with the bathroom outside and down the boardwalk, but a hip place.  As I came into the area today, things were different.  The cabins were there, but the restaurant and hangout were burnt to the ground.  It was for sale.  I was actually quite shocked that it hadn’t been rebuilt, as it seemed a very active and popular spot–there was no room when we came back through in 2006 and the stage area was packed.

But just up around the bend, I found McCoy and met Alan.  I had seen his antler covered shack next to his house and asked his wife, who was tending the garden, if I could photograph it.  Alan came out and showed me around–pictures will come of this later.  But my find of the day was the park between there and Bond, CO.  Now, if you ever wondered what your lottery dollars do for you, you need worry no more–see above photo.

Tomorrow, I will finish my route, back in Fairmont, NE, but I have decided to meander home instead of making a B-line as I did to get here.  I want to explore a little of Kansas and Oklahoma–the latter is one state I had never been in before this trip.  My guess is that I will be back in Austin on Friday and then I will sleep for many days!