Most of the weekend, except for the races, people seemed rather scarce around here.  Seemed they must be off for the holidays or just not out and about like on a work day.  Today, Monday,  was a little different.  Right from the beginning, I was meeting folks.  First, I stumbled across the Windsor Academy, an old style woodworking shop in Kirkwood, IL.  I met the owner Bill and his student, a Marine on leave, Doug.  They were working down a “stick” of raw wood with old fashion planing tools so that Doug could make his project for the week, a Windsor Chair.

There were several more people who just popped up here and there and then, I came across the National Stearman fly-in in  Galesburg, IL.  Stearman’s were WWII era bi-planes which were used by both the Army and Navy for training.  Strut constructed planes covered with fabric and painted.  As I drove up, there was a ton of these sitting in the field.  I took some shots from the highway, and then I went in and met Stephen and Old Bob, a couple of owners/pilots.  I got a great education on these old birds–the planes, not the pilots–and then I watched as Stephen started up and taxied and took off. 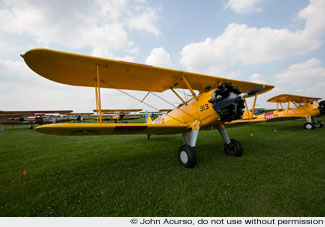 One thing I have been paying attention to along the road has been old theatre buildings.  The classic old ones.  These vary quite a bit and in Princeton, Il, I found a gem, the Apollo!  While I was shooting it, I noticed a barber pole and a great old barber shop-closed!  But as I looked in, the chairs were all the old red, leather chairs.  I took off my lens hood and pushed my camera to the door and got off some great shots–wasn’t going to let this one go!!

But my surprises for the day weren’t over.  As I was in one of the last small towns photographing an old painted sign, I heard a voice behind me asking if I wanted the car moved.  Pam had come out of the local tavern, where they had seen me.  A car was under the sign and she said it wasn’t hers, but she knew who’s it was.  The keys were in the ignition and she moved it off.  She then invited me in for, and bought me, a beer!  I met the entire crew in there, including Biff, who said he met me before when I was through here shooting the trains–without my saying anything about it!  Pam’s companion, Mitch, told me I just missed his having his three vintage John Deere Tractors out.  We finished our beers and he took me to his shed and pulled his 1956 fully resrtored tractor out into the yard for me.  I was running short on time, so I passed on having the others brought out, but he gave me some home made Salsa, central Illinois Salsa, to take with me!