Hebron, NE-9/01/09–As planned, this was to be a driving day — traveling through four states and completing 10% of the nominal mileage of the trip and arriving at my “jump off” point of Fairmont, NE.

Up at 5 AM, I was ready to leave the house at about 6 AM, but decided to have coffee with my wife and push back my arrival in the Fort Worth area, slightly, so that I might miss rush hour there. As it turned out, this plan was pretty effective as I only had one small delay right at the downtown exit.

Most of this driving was directly up Interstate 35 and then, at Wichita Kansas, up I135/US 81. I ended the day covering 767 miles, at Hebron, Nebraska.   I decided to stop a bit short as I was rather tired and I had my doubts I would find accommodations further up the road in Fairmont–based on my internet searches. 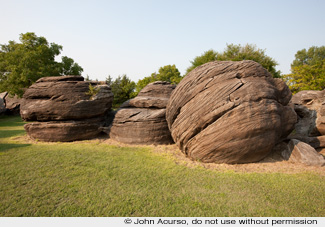 One of the "piles"

Other than stopping for gas, a sausage egg Mc Muffin and a bean burrito, there was only one other detour along the trip near the end of the day. There was no way I was going to miss Rock City in Minneapolis, Kansas. There are actually lots of photographs of this place on the Internet and they just intrigued me. To go somewhere that essentially looks like a very large dinosaur passed through and left some road apples right on this spot. If the Internet is to be believed, this is the only place on earth where you can see such a large number of these odd formations. Driving up to it, I  was a little disappointed as you first come across a sparse collection of some very small formations. But as you drive up the hill the larger and more concentrated field comes into view. Still, not a large area, these boulders appear to range up to 15 feet tall or more and I understand the largest is 27 feet in diameter. You really do feel like you’re walking among dinosaur feces as you stroll across the nicely manicured lawn (the lawn kind of spoiled it a bit, but I suppose it keeps the rattle snakes in better view!). Of course, like any public place, everyone seems to think that such natural forms are there for them to practice their writing. I was glad I stopped here, as it was a very nice drive through some beautiful homes in the Minneapolis area and I enjoyed going through the old town.  The rocks are actually quite interesting as, when you survey the area around them, you realize that these really are an oddity for this area.  Nothing else like them, or even close, can be seen in the area–just farm land.

As I said, this was a driving day and essentially the antithesis of what this trip is about. Tomorrow, I will start my slow meandering along the two-lane highways through the small towns in Nebraska and Iowa. Traveling up I-35, I realized why I really don’t like these roads. Although there is some beautiful scenery along the way, the only civilization one sees is the modern atrocities that these interstates have fostered. As I came into Oklahoma, there was a shopping center (not sure if it was under construction or remodeling) but I probably have never seen anything as ridiculous in my life. The architecture was broken up into approximately one hundred foot sections with one corner being ” Big Ben” style London followed by the Roman Coliseum with its broken facade, a medieval castle and then  by things I just don’t care to remember. It was such a hodgepodge and gave me the sense that we must be considered such imbeciles that we need to be lured by an amusement park atmosphere just to buy some new underwear.

As I drove through the countryside in Oklahoma and Kansas, except for a short flat area, the scenery was actually very nice. The red soil in Oklahoma was at times breathtaking.  I came to the conclusion that Kansas and Oklahoma are places I would like to return and explore. There is so much history here, of the old West, that would be nice to take time to visit. Some of the towns that I passed, included one that was considered the wickedest city in the west–Newton, Kansas–had interesting histories and appeared to be little changed in many years. And then there was the town where Boston (Thomas) Corbett, the soldier that shot John Wilkes Booth dead against orders, had lived. This man was such a fanatic that he castrated himself with a pair of scissors in order to avoid the temptations for prostitutes. (I have to admit that some of the Hookers that used to hang out in front of my old photo supply store in Hollywood might be worth avoiding using such extreme measures!) He lived in Concordia, Kansas– essentially in a hole in the ground. Boston aside, Concordia actually looks like a very cool place to visit and I was sorry it didn’t have more time to stop, but fatigue was starting to set in about the time I passed it.  Fortunately, I got a good look at the town from the highway and will stop on the way home if I come back this way.

Here the sign has been lit so that all can see!

My first stop, here in Hebron Nebraska, was at the Wayfarer motel. As I drove into town, there were two motels–one on each side of the street –a Budget Host and on the other corner, the Wayfarer. I drove on into town to check it out and to see if there is any more options.  Since there weren’t, I drove back after riding along the cobblestones of the historic downtown area. The Wayfarer appears to be a 1950s style motel and it was hard to actually know if it was open or not. But part of my quest is to find these little out-of-the-way places and avoid the cookie cutter chains. From the outside, the motel was not very inviting.  But I drove in the long driveway and into the parking area, where there was only one other car.  As I reached the back of the court, I saw the neon”open” sign in the office window. An Asian man greeted me and sent me into the office door.  He did not speak much English and had his young son (7 or 8 I would guess) translate some of my questions for him. He told me a room would be $33 for the night. I asked to see the room and was taken to a sizable and relatively attractive room. As I opened the door there was a bit of a smell of cleaning solution, however, it was faint and dissipated very quickly as I looked around the room. Everything was very clean, the bed firm and all in all a very comfortable room. The bathroom had nice vintage tile that was spotless with nice clean grout.  Nothing else about the place, the pool, which obviously hasn’t been used in a while, or the entry sign gave any indication that the place would be as nice as it actually is. When all you’re looking for is as a room to sleep, an Internet connection and a shower, this place certainly fits the bill. After I checked in, I was offered a soda and a bottle of water and was given directions to where I might find morning coffee, at 6 AM!  Everyone was very helpful and courteous.  (Note added in morning: The bed was very comfortable and firm and I slept very well, thank you!) 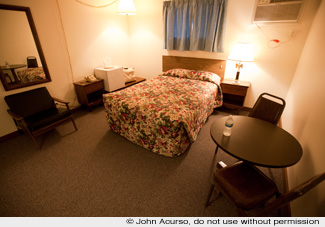 A very nice room for the night

Needless to say, I’m exhausted and look forward to hitting the sack and to this start of my adventure “Across the West” in the morning.