We learn when we ask and listen.

Instead of posting the follow up thread, Part 2:  Looking at Photographs, on my other blog, I took a bit of a time out to investigate what we learn about Composition and what we could learn.

Part of the reason for this is that this information will be import when I get to Part 3 of the “Looking” series.

So, I hope you can visit these two important posts:

A Tale of Two Worlds

As I mentioned earlier, I have started a new blog and, quite honestly, it has been taking up most of my time writing new entries there.  But I wanted all of you following here to know about some entries there that might be of interest:

First of all, I have just started a new series on Looking At Photographs and will be discussing important considerations in learning to understand and evaluate not only photographs more effectively, but these tools have application to all visual art.

Here is that link:  Part 1: Looking at Photographs—Context

I also recently posted a couple of articles that you might find of interest as you plan this years photographic trips/vacations-just some things to think about that can help make your efforts more productive.

“Looking For” vs “Finding” and

Yes, I have been neglecting this blog but not because I don’t want to post new things.  I just have been busy on my new blog, which is so time-consuming!

In any case, in my post “A Fortunate Arrival” here, I talked a bit about mid-day summer sun.  In my post today on my new blog, I elaborated on this with a bit more information and new photographs!

See it here “Light: the one we love to hate…and then some“

Well, I sort of disappeared here that last few weeks.  First, I was off to Portland for a week and then it was time to work at getting my new blog up and running.  I do intend to keep this one, at least for awhile as I see if they should be kept separate or combined.  It is a lot of work keeping these things going and the new one, well, I expect an entry or two per week!

Check out my new blog, which will be more educational and informational than experiential, as this one has been: 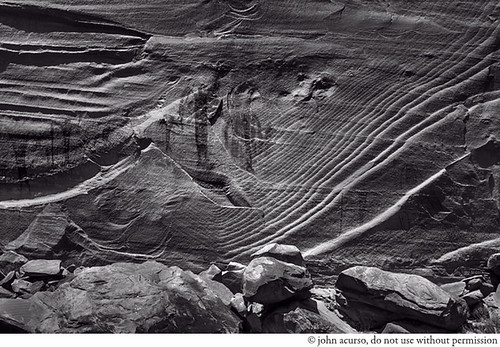 When I started that black and white challenge, a specific group of work was originally going to start it but ended up never even getting into the mix. So, I thought I should include it here anyway, as a continuation of my postings from this past May’s trip to Southern Utah.

I made it a point in an earlier entry—maybe several even—that once I get to my general area of interest, I wander and discover more than I search out anything specific. But I do research places within those general areas and, if I remember them and end up close or I feel the need for a destination, I might search these out. In this case, the weather had turned very cold and I decided to kill the two worst days in a motel in Green River, half way between the two main areas I had planned as destinations. (Green River has a few great older motels that are more than suitable for a place to sleep and to keep warm—or cool, as the case may be—and much more reasonable than anywhere else in the area.) 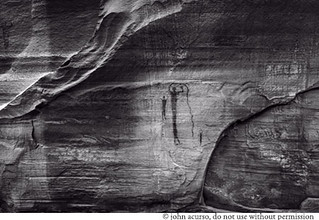 As I woke that first morning there, in my “holding pattern”, I decided to take a day trip to one of those researched areas, the Buckhorn Wash Pictograph panel. It was very cold and as I got into the pass west of Green River, there was snow covering the landscape from the storm the day before—and this was mid-May!  The directions I had were obviously wrong, as the off ramp indicated for the southern access to this area did not exist—well, it did but not with the name given in my directions. By the time I realized this, I was well past where I should have turned off and, to my good fortune, decided to head up to the northern entrance.

I say it was my good fortune because it delayed my arrival from early morning to almost exactly, the Solar Noon!**  Yes, you heard that right, being there at high noon proved to be the perfect time.  It was perfect because it was the only time that the light would hit the wall at a sharp enough angle to really bring out the amazing details of the natural markings there, which I found incredible.  As the wall faced to the southeast, this light was also a bit to my left as I photographed, which was also more revealing of most of these markings, which made things even more interesting.  It was like looking at a sea bed after the water slowly receded (and that is, likely, exactly what it was!). 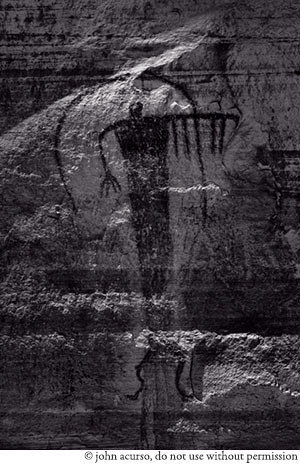 The pictographs there are among the finest, and most unusual, I have ever seen but I spent a lot of time just shooting the natural markings before I even left the parking area—which is right at the side of the panel, so there is easy access even for normal passenger cars as long as you don’t mind driving dirt roads.

It was wonderful to then photograph these ancient paintings within the context of this unique wall—which I am sure attracted these ancient people to this site.  Admittedly, this light wouldn’t be the best if you were just interested in documenting the paintings themselves.  I do like doing that, generally for myself, and so I waited an hour or so for the light to move over the shoulder of the cliff. Open shadow can really bring out those details that get hidden in the textures and larger topographic details emphasized by strong angular light—there is definitely a trade-off.  (if you would like to see a comparison between these two lights about how different detail is brought out–click here )

–If you have any questions or comments, please feel free to leave them below–and thanks for stopping by!

** I noted in an earlier entry here that I will be starting another blog—probably in a couple of weeks now that I need travel for a bit—that blog will focus more on educational aspects of photography, leaving this one for more experiential ones. The characteristics of light will be discussed there, at some point, in more depth.